My brother in Los Angeles and the pilgrims in New Orleans

I just spoke with my brother Christopher who is spending his summer as an intern at the Catholic Worker House in Los Angeles this summer. His description so far of his life and work was very moving. Apparently tomorrow he's getting a full tour of Skid Row and in a week or so Biblical scholar and theologian Ched Myers will be visiting the community. Matt and I plan to go and visit Christopher at the end of July. I'm so grateful that my brother is part of this amazing movement of love.

Also, over at Bishop Marc's blog Lily Moebes and Vickie Holt members of Grace Cathedral have posted reflections from the Diocese of California Pilgrimage to New Orleans and Taize. They left early this week. Here's a bit of what Lily and Vickie have to say,

Visiting the Lower Ninth Ward was the most striking part of the day. Over the past year, I have learned and had discussions about what happened during and after hurricane Katrina both at school and with friends. Even from a distance, it evokes complicated layers of confusion, frustration, sadness, sympathy, and anger. Seeing it in person made everything I had learned seem unnecessary. Even two years later, the physical devastation, the anger and attachment of residents, and just the monumental scale of what happened are even more evident in person as they were through a TV screen and through a newspaper. What seems silly to me is why the relief is so slow coming and why people are still living in such reduced conditions if 5,000 tourists have come through and seen it all so plainly.

At the end of the day, we drove through the Lower 9th Ward, right where the levees broke, and it was a completely out of body experience. I couldn’t feel anything at first. I wanted so badly to understand—to let the horrible truth wash over me…but it just wouldn’t hit me. I watched house after house pass our bus, and slowly became familiar with the X’s (keeping track of flood water, date, and bodies found), the drooping roofs, and the broken windows. I found myself searching every house for these signs, again and again, over and over. I wanted to see them, wanted to photograph them. It was aesthetically beautiful in a very strange way, but by the time we reached the Lower 9th Ward, I felt disgusting taking photos. I didn’t want to look at the destruction, I didn’t want to gawk from inside my air conditioned bus and the safety of returning home. I could not fathom the events of two years prior.

We pulled up to an intersection, and an overturned bus was lying by the side of the road. I don’t know what came over me, but I began to cry and looked away. There were empty lots on our right, and I stared out across them, and couldn’t bring myself to look at the houses on the left for about 3 blocks. When the emotion had passed I felt odd. I realized that to truly understand something, you have to let go of trying to, and instead just let yourself feel it, however that may manifest itself. Everyone reacts differently to phenomena. After I saw the bus, something clicked and I realized the sheer horror of the situation. Reality hits you when you least expect it, and you really can’t control how you will react.

Please keep Lily, Vickie and the many other pilgrims in your prayers, and pray for New Orleans that those who have suffered so much might receive relief, that justice might come to this place. 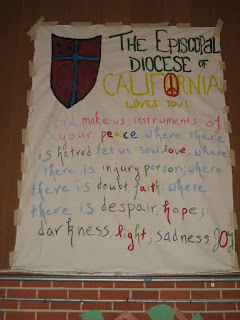 Posted by Will at 9:18 PM
Email ThisBlogThis!Share to TwitterShare to FacebookShare to Pinterest

Sorry to bother, you know Lily?
I've been trying to get in touch with her for about four years since she left Austin. Thank you!
b