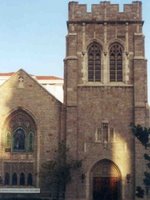 All Saints, a progressive Christian Church in Pasadena, California is continuing to be a target of the IRS for a sermon that challenged the President about the war in Iraq. Throughout the Bible the people of God are called to resist Empire and to endure the consequences for doing so. I am grateful for the witness of All Saint's, lets keep them in our prayers and hope that more faith communities will risk speaking the truth in love.

Here's how one story in the LA Times describes last Sunday's sermon by the Reverend Ed Bacon,

Bacon told the congregation that, although he recognized that the church could not endorse or oppose a political candidate, neither could it remain silent in the face of "dehumanization, injustice and violence." "History is shamefully littered with the moral bankruptcy of people who were Christian in name but not behavior," Bacon said, citing indifference by some Christians to slavery and the Holocaust. "Neutrality and silence in the face of oppression always aids the oppressor," he said. When he was done, Bacon received a minutelong standing ovation.

Posted by Will at 7:08 AM
Email ThisBlogThis!Share to TwitterShare to FacebookShare to Pinterest

One day I hope to visit it. I found your site thru jim's. Just wanted to say hello.

I am "moved" emotionally, but I recognize I have to be more than moved emotionally but in action and in speech and in life. Thank you for what you are writing and putting forth in your blog, Will. I saw your positive comment on Wallis's blog and appreciate it very much.