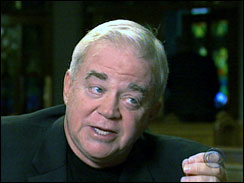 I've been commenting occassionally on the God's Politics Blog, an exciting new blog for Christians to discuss faith and politics led by Jim Wallis and Sojourners. Wallis and Sojourners are doing so much to help end the monologue of the religious right. Here's my latest comment with links to more information. You can watch the segment on YouTube.

I am so grateful that Jim Wallis and Sojourners are getting wider exposure. The segment on the CBS Evening News last night was just that, a segment. I thought Jim sounded strong and inviting. Let's make sure that this kind of coverage of evangelical progressives continues -- and that more progressive Christian voices are amplified in the press such as Diana Butler Bass, Shane Claiborne, Brian McLaren, Alan Jones, Michael Battle, Sister Helen Prejean, Desmond Tutu and Ched Myers.

For the monologue to be over -- we all need to speak up online, in our churches, and in our communities. There are many people especially in rural America (I was born and raised in the Shenandoah Valley of Virginia) who don't realize that there are progressive evangelical Christians. So even short segments in the media like the one last night make a difference.

There have been progressive Christians throughout history --- St. Francis of Assisi was hardly a hard-hearted conservative, nor was Dorothy Day in the 20th century. St. Francis was a pacifist who refused to support the crusades and went on a peace mission to meet with the "enemy." Dorothy Day was a strong supporter of worker rights and critic of the military industrial complex. Both were sincere Christians who believed in the Bible, in the creeds, and believed that Jesus wanted followers of his way of life not just worshippers.

Also Democrats have spoken about their faith and how it shapes public policy for a long time. Robert F. Kennedy was very articulate about how faith called us to care for the least of these. FDR's New Deal was organized by people of faith like Episcopalian Frances Perkins, also the first woman on a president's cabinet. Former Secretary of State Madeleine Albright recently spoke about her faith at Virginia Theological Seminary and has written a book about faith and politics. We progressive Christians need to remember our history and our heros -- the Saints of God who have spoken out in every generation for justice, peace and human dignity.
Posted by Will at 2:43 PM
Email ThisBlogThis!Share to TwitterShare to FacebookShare to Pinterest