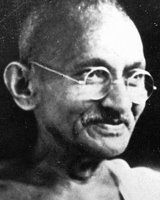 According to Tobias Winright, an ethics teacher in St. Louis,
"On Sept. 11 Americans will remember the fifth anniversary of the nightmarish terrorist attacks on the World Trade Center and the Pentagon. Probably unbeknownst to many, however, is that Sept. 11 also marks, according to the M.K. Gandhi Institute for Nonviolence, the 100th anniversary of Mahatma Gandhi's first public act of civil disobedience." Read more of this article here.

Walter Wink has been writing for a long time about the nonviolence of Jesus.

There's a strong piece on terrorism and nonviolence here.

Click here for more on M.K. Gandhi Institute for Nonviolence.
Posted by Will at 8:19 AM
Email ThisBlogThis!Share to TwitterShare to FacebookShare to Pinterest