Christianity for the Rest of Us 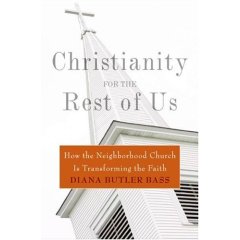 I have just started a new book, Christianity for the Rest of Us by author and scholar Diana Butler Bass. Diana's book offers hope to neighborhood churches everywhere and points the way toward healthy, vibrant, faithful Christian community. As a young adult, I yearn for a Christianity that is rooted in tradition, yet filled with the Spirit of the living God --- a Christianity that is aware and responsive to the needs, concerns and hopes of this aching planet. Diana shares real stories from real churches all around the country seeking to live the gospel way of life --- feeding, forgiving, healing, reconciling and transforming.

For three years Diana studied centrist and progressive churches and discovered many that are "flourishing, and they are doing so without resorting to mimicking the mega-church, evangelical style." Paraphrasing one commentator, it may just be that the church so many are yearning for is just around the corner. God grants us wisdom and courage through the words of this fellow pilgrim. Here's a glimpse inside Diana's book,

"On my journey, I traveled with those who are more comfortable in the wilderness, people who were willing to explore the new terrain around them. Yet they did not travel alone. I found that in the breakdown of old villages, Christians are forming a different sort of village in congregations cross the country. Not spiritual gated communities or protected rural villages. Rather, their new kind of village is a pilgrim community embarked on a journey of rediscovering Christianity, where people can forge new faith ties in a frightening and fragmented world. For those I met, change was not always easy, and their churches were not perfect. But they embodied courage, creativity, and imagination. And risk. In reaching toward a new kind of Christianity (which is, as I hope will become obvious, actually an old kind of Christianity), they serve as a living guidebook for spiritual nomads who are seeking to find wisdom's way." Christianity for the Rest of Us, pg. 25

Posted by Will at 11:09 AM
Email ThisBlogThis!Share to TwitterShare to FacebookShare to Pinterest

Sounds cool....
Too bad finding the signs of the progressive church is so difficult.7