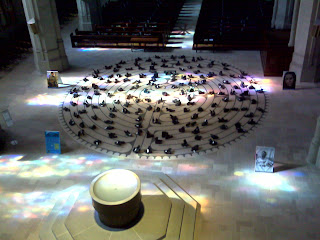 Members of the Episcopal Diocese of California are gathering this morning at Grace Cathedral with Bishop Marc Andrus to process down to Civic Center where we will join hundreds of thousands in calling for an end to the war in Iraq. Thursday night Grace hosted 300 people of faith for an Inter-Religious Prayer Service for Peace in Iraq, organized by the Inter-Religious Working Group of the October 27 Coalition. Displayed on the labyrinth of Grace Cathedral were boots representing the thousands of U.S. troops killed in Iraq, the names and faces of Iraqis killed were also part of the exhibit. Let's bring an end to this war and work hard for nonviolent solutions to global challenges. Frankly, I'm tired of attending marches against this war. Before the invasion began, I attended huge marches in Washington, DC, and New York as a seminarian with numerous classmates and professors. I'm frustrated that the media and government for the most part ignore us and the growing majority of Americans who want this war brought to an end. But it is my community of faith that inspires me to be persistent.

Over at God's Politics, influential evangelical pastor Brian McLaren has written a strong piece encouraging Christians to challenge those who are beating the drums of war against Iran. Check it out and share widely.
Posted by Will at 9:31 AM
Email ThisBlogThis!Share to TwitterShare to FacebookShare to Pinterest

Beautiful Picture...I wish I had been there to take some pics. This must be incredibly saddening, I will do my best to be there next time.

I would love to have a chat with you about this, as I am concerned that the loss of life in respect to the Iraq populous is not being represented strongly enough. I imagine the number of shoes would become FAR larger.

Take care, Will and I am glad to hear you were not arrested this time ;)