Doctor Who as a parable of Christ

This morning Matt was thrilled to share this story with me. I think he's likely the greatest fan of Doctor Who in North America. If you don't know the program it is well worth checking out, longest running science fiction television series ever. 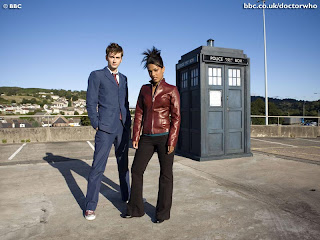 Church hosts Doctor Who service
A church is to host a Doctor Who-themed communion service aimed at young people.

St Paul's Church in Grangetown, Cardiff, was once used as a filming location for the BBC Wales-produced series.

The "cafe-style" service for people in their teens and early 20s, will feature music and clips from the hit show.

One of the organisers Fr Dean Atkins, said as a saver of the world, Doctor Who was "almost a Messiah figure".

Two years ago, the Anglican church was used as a location for the Father's Day episode of the first series, in which a giant reaper creature attacked wedding guests at the church.

Fr Atkins, youth officer with the Diocese of Llandaff, said: "In the series there are lots of references to salvation and the doctor being almost immortal.

"We are using the figure of Doctor Who as a parable of Christ."

The language used in the series also lends itself to exploring the Christian faith, he said.

He added: "Christ is a kind of cosmic figure as well if you like, somebody who does not travel through time but all eternity is found in him.

"He is a kind of encapsulation of the beginning and the end, in fact he existed before time began and he will exist when time ends."

Parish priest Fr Ben Andrews said: "I love the series and it has such a great following that we couldn't resist doing something for young people on a Doctor Who theme.

"Lots of people think that young people are the future of the church.

"This kind of event will show they are part of the church of the present and have an important part to play in its future.

"We are building on the past but always looking forward."

You're back from your hiatus! :) I have missed reading your entries. As for these dear people in Cardiff, I don't quite know what to make of it, but it is certainly illustrative of the show's popularity. I loved the episode that this church was in--"Father's Day" by Paul Cornell. I really did cry! I can remember watching it early on a Sunday morning and tears dripping into my breakfast. Cornell went on to adapt one of his novels into the remarkable Series Three two-parter "Human Nature"/"The Family of Blood."

These articles are fantastic; the information you show us is interesting for everybody and is really good written. It’s just great!! Do you want to know something more? Read it...:Great investment opportunity in Costa Rica: Jaco Condominiums for Sale, Jaco Condos,Jaco Condo Rentals. Visit us for more info at: http://www.jaco-bay.com/