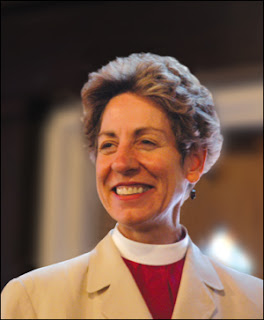 Today was another rich and full day at Grace Cathedral, with the Episcopal Church's Presiding Bishop Katharine Jefferts Schori and Bishop of California Marc Andrus at the Forum and the 11 a.m. service. You can hear both the Forum and the service online at www.gracecathedral.org

The Presiding Bishop's homily was provocative and gave me a renewed appreciation for angels. You can read the text of the homily here.

Below is a story from the San Francisco Chronicle:

On Sunday - the deadline set by church leaders for the Episcopal Church to roll back support for same-sex unions - the U.S. church's presiding bishop spoke unequivocally at San Francisco's Grace Cathedral that there would be no retreat.

"All people - including gay and lesbian Christians and non-Christians - are deserving of the fullest regard of the church," the Most Rev. Katherine Jefferts Schori declared during an hourlong discussion before services. "We're not going backward."

Jefferts Schori said these are the views of the church's bishops as well as of its lay members - who have increasingly affirmed rights for same-sex couples. As such, Jefferts Schori's comments served as the punctuation to a historic day.

What will happen next is unknown. But a number of U.S. bishops on Friday declared that they are unifying the scores of breakaway churches that view homosexuality as sinful. They are seeking alternative oversight from conservative leaders based abroad.

Anglican Communion leaders issued a communique in February for the U.S. Episcopal Church's bishops to state by Sept. 30 that the church would not authorize rites for same-sex unions or approve gay clergy as bishops. Conservatives viewed it as an ultimatum. Some have suggested that the Episcopal Church's price for noncompliance might be lesser status within the 77 million-member Anglican Communion, the body of churches whose roots are in the Church of England.

The issue of whether gays and lesbians in committed relationships can have their unions blessed by their churches may be the single most divisive issue in U.S. Christianity today. Presbyterian, Methodist and Lutheran denominations all are torn over the issue. But it plays out dramatically on a global scale among Anglicans, who are the largest, most unified Protestant body in the world.

Jefferts Schori and other Episcopal bishops believe the Anglican Communion is defined by a tolerance for a wide set of beliefs. They believe the communion should continue to minister to a variety of views.

"The pastor's job as shepherd is to mind the whole flock," Jefferts Schori said, referring to a biblical parable of a shepherd who goes searching for one lost sheep. "I am continually, prayerfully reminded of those who are wandering off. The job of the church is to reach ever wider to include the whole."

That Jefferts Schori would be in San Francisco on the deadline day was a coincidence: She had accepted the invitation to come over a year ago, long before the Anglican Communion's leaders issued the communique on same-sex issues in February. But her views, the Episcopal Church's direction and the setting all affirmed each other.

"It's an accident in some sense, but it's a blessed accident," Jefferts Schori said in an interview about the significance of her speaking Sunday in San Francisco.

The 27,000-member Diocese of California, based in San Francisco, has ordained more gay and lesbian clergy than any other. Priests in the diocese - which includes San Francisco, Marin, San Mateo, Alameda, Contra Costa counties and part of Santa Clara County - have blessed same-sex unions for more than three decades.

Those practices, once on the margins of the Episcopal Church, have become the mainstream.

The church's House of Bishops gathered in New Orleans last week to discuss how to respond to the communique. They chose to maintain the status quo: They would "exercise restraint" by not consecrating any gay, partnered candidates for bishop, and they would not authorize "any public rites of blessing of same-sex unions."

For conservatives, the statements were hollow because it allows priests to privately bless same-sex unions.

"This is neither prohibition nor restraint," said a statement issued Wednesday by the Right Rev. John-David Schofield, bishop for the Fresno-based Diocese of San Joaquin. "It is simply turning a blind eye."

Conservative bishops and priests in the United States believe Anglican leaders in Africa hold a truer understanding of Christ's teachings.

"The church in the West has lost its way," the Right Rev. Robert Duncan, the bishop of Pittsburgh, said on Friday, in announcing the new coalition. "The church in the 'Global South' is utterly clear about what it is to follow Jesus Christ."

Jefferts Schori said on Sunday that she sees the path of Christ in a different manner.

Jefferts Schori is skeptical of the fate of any breakaway churches or diocese, saying Duncan's efforts would be the latest in a line of splinter groups that failed.

"There's such a long history of splitting that it would be a sign of the Spirit's movement if he were able to gather them into a coherent whole," she said.

"American Protestantism is characterized, unfortunately, by the desire to fracture," she said. "There's a piece to American character that we have to have fully defined, black and white, precise understanding. And that's not a terribly Anglican characteristic."

Many of those gathered Sunday applauded Jefferts Schori, saying they support her views and believe that the direction of the church will ultimately lead to full equality - having formal, authorized rites for same-sex unions.

But some view the current treatment of gays and lesbians as tantamount to second-class status.

Christopher Hayes, 40, of San Francisco said he and his partner of 13 years are in the planning stages of their same-sex union, a ceremony that will take place in Grace Cathedral. But he feels frustrated by the state of events.

"I want to hear that we're not satisfied with where we are right now," he said.

Jefferts Schori said the time is not right - yet - for such a moment.

While some conservatives may leave because of the church's views, she said others may be drawn to the fold.

"Decisions the church as a whole makes can open the door wider for people who have not been part of a faith tradition or this part of Christianity. ... The church always is changing."

Posted by Will at 9:47 PM
Email ThisBlogThis!Share to TwitterShare to FacebookShare to Pinterest