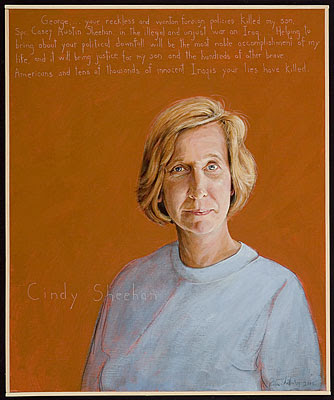 A few years ago I heard Cindy Sheehan speak at an Interfaith Prayer Vigil near the White House. I am saddened that she has decided to walk away from the movement to end this war but grateful for her profound and costly witness. May this be an invitation to all of us who care about ending the war in Iraq to increase our efforts and to remember the sacrifice of so many for the cause of a just and peaceful world. Thank you Cindy Sheehan for all you have done to inspire courage and change. You and so many other parents of soldiers are in my prayers.

Below is Sheehan's statement posted originally at Dailykos:

I have endured a lot of smear and hatred since Casey was killed and especially since I became the so-called "Face" of the American anti-war movement. Especially since I renounced any tie I have remaining with the Democratic Party, I have been further trashed on such "liberal blogs" as the Democratic Underground. Being called an "attention whore" and being told "good riddance" are some of the more milder rebukes.


I have come to some heartbreaking conclusions this Memorial Day Morning. These are not spur of the moment reflections, but things I have been meditating on for about a year now. The conclusions that I have slowly and very reluctantly come to are very heartbreaking to me.

The first conclusion is that I was the darling of the so-called left as long as I limited my protests to George Bush and the Republican Party. Of course, I was slandered and libeled by the right as a "tool" of the Democratic Party. This label was to marginalize me and my message. How could a woman have an original thought, or be working outside of our "two-party" system?

However, when I started to hold the Democratic Party to the same standards that I held the Republican Party, support for my cause started to erode and the "left" started labeling me with the same slurs that the right used. I guess no one paid attention to me when I said that the issue of peace and people dying for no reason is not a matter of "right or left", but "right and wrong."

I am deemed a radical because I believe that partisan politics should be left to the wayside when hundreds of thousands of people are dying for a war based on lies that is supported by Democrats and Republican alike. It amazes me that people who are sharp on the issues and can zero in like a laser beam on lies, misrepresentations, and political expediency when it comes to one party refuse to recognize it in their own party. Blind party loyalty is dangerous whatever side it occurs on. People of the world look on us Americans as jokes because we allow our political leaders so much murderous latitude and if we don’t find alternatives to this corrupt "two" party system our Representative Republic will die and be replaced with what we are rapidly descending into with nary a check or balance: a fascist corporate wasteland. I am demonized because I don’t see party affiliation or nationality when I look at a person, I see that person’s heart. If someone looks, dresses, acts, talks and votes like a Republican, then why do they deserve support just because he/she calls him/herself a Democrat?

I have also reached the conclusion that if I am doing what I am doing because I am an "attention whore" then I really need to be committed. I have invested everything I have into trying to bring peace with justice to a country that wants neither. If an individual wants both, then normally he/she is not willing to do more than walk in a protest march or sit behind his/her computer criticizing others. I have spent every available cent I got from the money a "grateful" country gave me when they killed my son and every penny that I have received in speaking or book fees since then. I have sacrificed a 29 year marriage and have traveled for extended periods of time away from Casey’s brother and sisters and my health has suffered and my hospital bills from last summer (when I almost died) are in collection because I have used all my energy trying to stop this country from slaughtering innocent human beings. I have been called every despicable name that small minds can think of and have had my life threatened many times.

The most devastating conclusion that I reached this morning, however, was that Casey did indeed die for nothing. His precious lifeblood drained out in a country far away from his family who loves him, killed by his own country which is beholden to and run by a war machine that even controls what we think. I have tried every since he died to make his sacrifice meaningful. Casey died for a country which cares more about who will be the next American Idol than how many people will be killed in the next few months while Democrats and Republicans play politics with human lives. It is so painful to me to know that I bought into this system for so many years and Casey paid the price for that allegiance. I failed my boy and that hurts the most.

I have also tried to work within a peace movement that often puts personal egos above peace and human life. This group won’t work with that group; he won’t attend an event if she is going to be there; and why does Cindy Sheehan get all the attention anyway? It is hard to work for peace when the very movement that is named after it has so many divisions.

Our brave young men and women in Iraq have been abandoned there indefinitely by their cowardly leaders who move them around like pawns on a chessboard of destruction and the people of Iraq have been doomed to death and fates worse than death by people worried more about elections than people. However, in five, ten, or fifteen years, our troops will come limping home in another abject defeat and ten or twenty years from then, our children’s children will be seeing their loved ones die for no reason, because their grandparents also bought into this corrupt system. George Bush will never be impeached because if the Democrats dig too deeply, they may unearth a few skeletons in their own graves and the system will perpetuate itself in perpetuity.

I am going to take whatever I have left and go home. I am going to go home and be a mother to my surviving children and try to regain some of what I have lost. I will try to maintain and nurture some very positive relationships that I have found in the journey that I was forced into when Casey died and try to repair some of the ones that have fallen apart since I began this single-minded crusade to try and change a paradigm that is now, I am afraid, carved in immovable, unbendable and rigidly mendacious marble.

Camp Casey has served its purpose. It’s for sale. Anyone want to buy five beautiful acres in Crawford , Texas ? I will consider any reasonable offer. I hear George Bush will be moving out soon, too...which makes the property even more valuable.

This is my resignation letter as the "face" of the American anti-war movement. This is not my "Checkers" moment, because I will never give up trying to help people in the world who are harmed by the empire of the good old US of A, but I am finished working in, or outside of this system. This system forcefully resists being helped and eats up the people who try to help it. I am getting out before it totally consumes me or anymore people that I love and the rest of my resources.

Good-bye America ...you are not the country that I love and I finally realized no matter how much I sacrifice, I can’t make you be that country unless you want it.

The artwork above is by artist Robert Shetterly and is part of a series of portraits called "Americans Who Tell The Truth".
Posted by Will at 9:17 PM
Email ThisBlogThis!Share to TwitterShare to FacebookShare to Pinterest

this is unutterably sad. i'm deeply grateful for her witness, and her personal sacrifice. it seem that one response i can make, in addition to thanking her, and offering friendship in her disappointment, is to resolve to be a more mutually supportive part of the movement for peace

She was and is a voice crying out in the wilderness. Her critique of progressives who do not play well together is all too true. The "burnout" she seems to be experiencing reminds of the need for self-care and especially contemplative prayer as the foundation of service.

She is right also to insist that this is not a partisan issue. Yes, we have a Republican presidential administration, and Bush and his staff are responsible for disseminating the lies and distortions and sleights-of-hand that got us into this moral mess. And yes, the party that prides itself on "values" appears to have placed higher priority on party loyalty than truth, objectivity and compassion.

But it is also true that a majority of Democrats voted to empower the President to conduct his "War on Terror," and since that time, some politicking and grandstanding and futile gestures aside, very little has been done to correct this egregious mistake. Now that the Democrats control both Houses of Congress, they continue to dither over timelines and phased withdrawals and vetoes and benchmarks. They can't see, as the rest of the world plainly can, that there is no good option available. Withdrawal from Iraq will be a disaster, but so is staying there. This is our fault, for which we must assume collective responsibility -- including the electorate -- and for which we must together find a path to healing, both at home and in Iraq. But there has never been a military solution to this problem. You can't kill enough people to make it go away. We need to accept that you can't establish a model, cooperative democracy at gunpoint in the midst of a boiling, centuries-old sectarian conflict. We must accept that the goals we had -- while noble -- were never realistic, or, at the very least, that our plans certainly weren't.

I'm not sure there *is* anything we can actually do to fix this. But, with God's grace, this country will start to learn that using our military to enforce an "America Knows Best" foreign policy around the globe, and hopefully we'll never do it again.