Episcopal bishop arrested in protest over war in Iraq 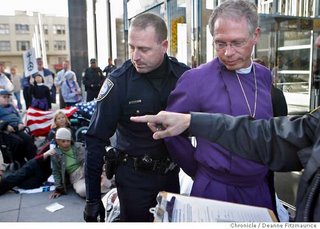 Andrus, carrying a shepherd's staff and singing "Down by the Riverside,'' was among about 200 protesters who had marched from Grace Cathedral on Nob Hill to join the weekly anti-war rally on Golden Gate Avenue near City Hall.

A great interview and story is available from the Episcopal News Service here.

Posted by Will at 9:57 PM
Email ThisBlogThis!Share to TwitterShare to FacebookShare to Pinterest