Testifying to Love - Why I was arrested 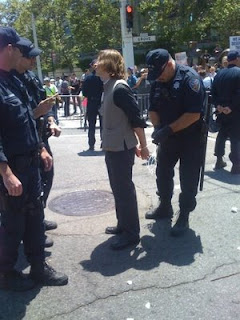 Ann Fontaine of the Episcopal Cafe, encouraged me to share my reflections on what happened yesterday. Thank you for all the prayers and support. I am so grateful for the congregants and staff of Grace Cathedral many who stood alongside those of us being arrested and who have offered their support in numerous other ways as well. At the service prior to yesterdays march we sang a beautiful song with the refrain, "we are all in this together." The struggle continues...

Testifying to Love - Why I was arrested

I grew up in a small Episcopal Church in Virginia’s Shenandoah Valley where that tiny mid-century A-frame building on a hill and its odd mixture of congregants became for me as a gay person an oasis of encouragement, love, and support. When most other churches were campaigning for prayer in schools, we were learning about what we could do to end apartheid in South Africa, other churches encouraged their flock to listen to James Dobson while we were invited to listen to the words of Archbishop Desmond Tutu. There at St. Paul's on-the-Hill, as a young acolyte I first heard about how faith compels us to stand with those pushed to the margins, and to work for justice. Yesterday was not the first time I’ve been arrested seeking to bear witness to a faith that calls us to honor the dignity of every person --- it is not likely to be my last.

How did I end up in the street? I prayed and felt inspired. On Monday night, I was part of a group led by the Reverend Roland Stringfellow, coordinator of the Bay Area Coalition of Welcoming Congregations that organized an interfaith prayer vigil at Grace Cathedral on the eve of the Supreme Court's decision. The first part of the event was filled with beautiful and moving
words and music from various people of faith, towards the end things got more explicitly personal and political. A gay couple stood up and spoke nervously for the first time of how inequality and homophobia were affecting them in the workplace, in how they accessed health care (one of them is disabled) and paid their taxes (they would save over $4,000 a year if they were counted the same as a straight married couple). The couple shared that they rarely came anywhere near places of worship, but this event encouraged them to speak up even in a church. As they spoke I thought of how my beloved Matt and I had moved from Virginia to California three years ago to be in a more supportive context for our relationship. Next Kip Williams a passionate young organizer with the group One Struggle, One Fight spoke about their plans for the next day if the Supreme Court upheld Prop 8 and then invited those in the faith community who were willing to risk arrest to stand. There was an uncomfortable pause, and a few people stood up, and I found myself standing up to join them. In some ways it was like an altar call, we were being invited to walk the walk, not just talk the talk. At the close of the service I was asked to invite the gathered congregation to spend time praying and lighting candles throughout the cathedral. Here’s what I said,

On behalf of the Bishop, clergy, and staff of Grace Cathedral I want to thank you all for coming tonight. As we move out from this sacred circle, I invite you to wander amidst the many chapels, windows, murals and icons of this holy space --- a place where so many individuals, couples, and families have found solace, inspiration and strength for their journey, struggle, and work for justice. Light a candle; say a prayer for all who will be affected by tomorrow¹s decision. Remember that we are surrounded by a great cloud of witnesses, generations of gay, lesbian, bisexual and transgender persons who like us struggled to find hope, as you walk past the UN mural pray for our LGBT brothers and sisters throughout the world who share our yearning for liberation, as you walk past the icon of Mary Magdalene of the 1st century and Martin Luther King of the 20th remember our solidarity with women, people of color and the poor, as you look up to the windows containing the images of scientists like Einstein and theologians like Martin Buber remember all those who were persecuted for seeking and speaking the truth as they experienced it, this Memorial Day let us also remember the many glbt persons who have served this country --- may we discover in the courage and perseverance of all these persons reason to continue our work for justice and equality.

And now a final blessing,

The blessing of the One who liberates the oppressed, who blesses all the families of the earth and whose name is love be upon you and remain with you always. AMEN

The saints who dance with us around the altar at communion, in the icons, murals and windows of our churches to me are not static but are moving. I experience their presence as continually inviting us to make the gospel real now in our time, in our lives. We are forever invited to join them in movements for justice and equality --- movements that testify to love. While the Supreme Court’s decision yesterday was bad news for so many, the willingness of people to stand up for the faith and hope that is within them, to testify to the love they know is real and true is a proclamation of the good news.

Yesterday, on the march from the Castro neighborhood to Civic Center I was joined by an Iraq war veteran, a young Latino man named Joseph carrying an American flag and wearing his badges of honor. He was arrested yesterday as well. When I took my spot in the large circle of a 150 or more in the street outside City Hall I found myself sitting next to David a 19-year-old transgender man who works at the grocery store in my neighborhood. When I stood up to stretch my legs I saw Brendan, a 20 something lay person from St. Gregory’s of Nyssa dancing in the circle to music provided by a visiting folk band on the sidelines. Across the circle was Rabbi Sydney Mintz from Congregation Emanu-el, a synagogue with strong ties with Grace Cathedral and Buddhist Nun Jana Drakka sitting near Episcopal Deacons Anthony Turney and Nancy Pennecamp. Down the way from me was Reverend Dawn Roginski from St. Francis Lutheran Church where the Morning Prayer service prepared us for the day’s work. In the paddy wagon on our way to the county jail, I learned more about Kip Williams, who said when the day started they were praying they would have at least 30 people willing to risk arrest, now there were so many more. We learned how Kip’s first act of civil disobedience was at a nuclear weapons manufacturing facility in his home state of Tennessee and how his diverse community of faith helped him in coming out. Others in the wagon talked about Paul Farmer and his work in Haiti. Each of us in some way seemed to get that what we were doing was linked, inspired, and related with the wider movements for human rights and justice. As we were led out of the wagon and into our designated holding areas I caught glimpse of a young tall African American man, whose hair standing straight up reminded me of photos I'd seen of Bayard Rustin. Rustin is someone far to easily forgotten, a gay, African American, man of faith who helped organize the 1963 March on Washington for Jobs and Freedom and advised the Reverend Martin Luther King Jr. on the nonviolence of Gandhi.

LGBT people of faith in San Francisco and throughout the world would do well to remember our connections to other movements --- and gain inspiration, courage and strength for our contemporary struggles. There are many causes, and concerns worth our time and energy --- may we each discern with God's help our place in the dance and testify to love.
Posted by Will at 3:11 PM
Email ThisBlogThis!Share to TwitterShare to FacebookShare to Pinterest

Thank you for your beautiful, challenging, important thoughts, Will.

God Bless you and keep you, Will. Thanks for your ministry. Allison

I'm so proud of you, Will. Thank you for all that you are doing.

Proud of you my brother...

Will, we gave thanks for you tonight at the 7pm service as I prayed for everyone who is fighting discrimination, esp you all in CA with yesterday's events. I'm proud to be the rector of your home parish. May SPOTH continue to teach such lessons of faith to our children.

Jennifer+ said...
This comment has been removed by a blog administrator.
9:17 PM

Your leadership and service has been an inspiration to me for years now - and I expect you will inspire me for years to come.

Blessings and Peace to you my friend.

Thanks Fr. Will for your public witness! Getting arrested during a protest was, for me, something of a liberating experience. It was also a total eye-opener for me to know and experience what it is like for other people (mostly the poor sitting with me in jail all night) who are arrested, incarcerated, and move (or don't move) through the American criminal justice system. How ironic that people who torture, destroy the economy, and start illegal wars get federal pensions and live in total freedom with impunity. While people who nonviolently protest injustice are arrested. I was blessed as a gay man, like you, to grow up in the embrace of a progressive Episcopal parish family. As far as I know, at least there was no police violence against protesters in SF like we had at the recent Moscow Pride event.

Will, I give thanks that there are people out there with your courage and your freedom to act on that courage. You inspire me with hope for the future, but more importantly, you are part of my "bonus" family, and you remind me of the love of God that passes all understanding.

Thank you and God bless you for your faithful, non-violent witness on the behalf of your GLBT brothers and sisters (including me).

Thanks to The Lead on Episcopal Cafe for direction to your story.

Sometimes we have to do what we have to do...it´s part of the ¨getting to know¨ who we are...it´s a open/inclusive hospitality program often misunderstood.

BEST TO YOU, onward!

I join the chorus of thank you's! What a powerful witness you bring to this. . .

Thanks, Will for taking this step and for sharing your thoughts!

Thanks for your steady faith and good humor, Will.
Blessings to you and Matt.

Hey Will, are you the guy who was doing the 7:30 am Eucharist at Grace up until it was dropped earlier this year? I was very disappointed that it had to end. Even though I only made it every once in a while, it was among the most profound moments of faith in my life. In any case, keep up the good work.

Thanks for your comment. The Cathedral's daily Eucharist is still going on at 12:10 p.m. everyday and 7:30 a.m. on Thursdays. When the 7:30 a.m. was every day of the week, I was scheduled on Friday mornings.

Hope to see you soon.