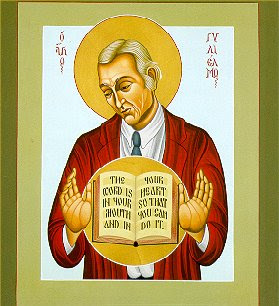 Last week, as I was preparing to teach an introductory class on Anglicanism at Grace Cathedral I googled one of my favorite Episcopal/Anglican 20th century saints, William Stringfellow. Stringfellow was a passionate lawyer, lay theologian and advocate for justice. Gratefully, among the list of articles about Stringfellow, I found this beautiful reflection on Stringfellow's life by Nathan Schneider, a New York writer whom I discovered is also originally from Virginia. Check out Nathan's great blog The Row Boat as well.

Here's a bit from Nathan's reflection:

Consequently Stringfellow’s God is not just a character to whom we must defer to for the sake of some future salvation, nor some almighty therapist. God is the means for inhabiting a world filled with mighty principalities and powers. Stringfellow clings to the promise that “Jesus is Lord” because if that is so, there is a reason to love our neighbor no matter what the principalities and powers—from the Pentagon, to “family values,” to the Ford Motor Company—may say. These things are all doomed to death anyway. “Resurrection,” he explains, “refers to the transcendence of the power of death, and of the fear or thrall of the power of death, here and now, in this life, in this world.”

His own answer to the powers came in simple acts. Defending poor black and Latino people in court even though they were not of his clan. And offering hospitality to his friend Daniel Berrigan even when it meant breaking the law. And being with the person he loved, despite the disapproval of society and the churches.

The icon above is by Fr. William McNichols

Posted by Will at 2:00 PM
Email ThisBlogThis!Share to TwitterShare to FacebookShare to Pinterest

I've long admired Stringfellow. Thank you for the icon of him and quotes from another blog I need to investigate.