VOTE NO on PROP 8 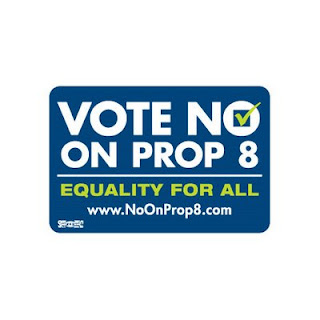 Last night, a large group of Grace Cathedral folks and friends gathered to watch the powerful documentary For the Bible Tells Me So. We also talked a bit about the important role people of faith have to play in the movement for equality. On election day Californians have an opportunity to stand up for the equal rights of all by defeating Prop 8 which if passed would deny gay and lesbian couples the right to marry. Conservative religious groups, many from outside the state, are pouring money into advertising in support of the proposition but other people of faith are working hard to defeat it. All the Episcopal Bishops of California are encouraging people to vote no, you can read more about their efforts here.
I was moved to learn of a Roman Catholic priest in Fresno, California who recently preached a sermon calling his congregation to vote no on Prop 8. Read more about Father Geoff Farrow over on Susan's blog, An Inch at a Time.  Thank you Fr. Geoff for your courage and compassion.
There are many ways to get involved in the movement, volunteering, phone banking, and donating money. Visit No On Prop 8 to learn more.
Posted by Will at 10:35 AM
Email ThisBlogThis!Share to TwitterShare to FacebookShare to Pinterest

I believe you need to do some fact-checking. Prop. 8 does not take any of the rights away from people of same-sex attraction. All the same rights that hetero married folks have were granted to domestic partnerships in the state of CA in 2005. (see the California Domestic Partnership Law)
All Prop. 8 does is define the word "marriage" to mean between one man and one woman. This proposition is NOT an attack on same-sex attracted people. Please do not encourage intolerance toward people of different moral beliefs than yourself by saying the those who support Prop. 8 are haters and bigots. That is simply not true.

With all due respect, Laura, I must disagree with you. Prop. 8 reinforces second-class citizenship for gays and lesbians, and that is simply not acceptable. As the CA State Supreme Court ruled, it is fundamentally unconstitutional. Separate-but-equal status is not okay. Churches can reserve the right not to perform same-sex weddings if they are against them, but legally, gays and lesbians absolutely deserve the right to marry, without having to call it something else just to make social conservatives comfortable.

sevenofrhymes said...
This comment has been removed by the author.
1:02 PM

The California constitution is fine the way it is.

The beauty of voting no on 8 is that it leaves everyone's freedom intact. Churches, synagogues and mosques will be free to define marriage as they choose. And LGBT Californians will keep the equal rights they're entitled to under the law.

Laura, Prop 8 will make your personal religious beliefs the law in California. I have to admit: that is one heck of a special right. Unfortunately, it violates a key principle not just in California, but in America. It's called "freedom of religion." Or did you want to amend that part of the constitution too?

Laura, I have a confession to make. I am very intolerant of people who want to take away my basic civil and human rights. I am a gay man. As an American soldier, I fought for and I was wounded for the United States in the military. Now my own relationship with the man I love is not recognized by the federal gov't of the country I shed my blood for and was willing to die for. The United States Constitution makes no provision for defining marriage any more than it defines the proper ingredients of apple pie. The Constitution does separate religious belief from public establishment. Is the 50% divorce rate amongst heterosexuals something you want to preserve as part of your tradition, too? How will my same-sex marriage make the sad state of heterosexual marriage any worse than it is now? After all of the sacfifices we've made, why can't you support your nation's troops by letting their relationships be recognized as marriage? I certainly respect the rights of "traditional" heterosexuals to get as many divorces and remarriages as you want. How about some respect for my rights?
мир вам!
Peace be with you, Mark