Exciting! A People's History on TV

A People's History of the United States is a very important book and one that I was encouraged to read when taking classes at the Servant Leadership School in Washington, DC.

I later heard the author Howard Zinn, Marian Wright Edelman, and Julian Bond read "Voices of A People's History" at my favorite D.C. restaurant/bar/coffeeshop/performance space Busboys and Poets. A television series based on "A People's History" is an excellent idea. 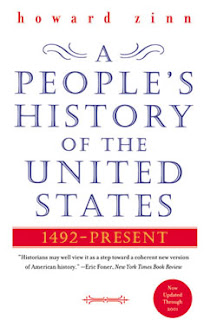 Zinn will host the longform project, which begins shooting next month in Boston. Project, to be exec produced by Zinn, Anthony Arnove and First Tuesday Media’s Chris Moore, has not yet been sold to a network.

Damon and Moore have been looking to adapt “A People’s History of the United States” on television for nearly a decade.

Damon, who lived next door to Zinn as a child, and Ben Affleck included a reference to Zinn and “A People’s History” in their Academy Award-winning “Good Will Hunting.” Soon thereafter, the scribes and Moore (also a “Good Will Hunting” producer) sold a 10- to 12-hour miniseries to Fox based on the book.

“A People’s History” was slated to run on Fox in 1999, but that didn’t happen; later, HBO developed a three-part version but eventually passed as well.

The new adaptation will draw from both “A People’s History,” and sequel tome “Voices of A People’s History of the United States,” which Zinn wrote with Arnove. Miniseries will center on the actors and musicians as they read from the books or perform music related to their themes: the struggles of women, war, class and race.

The longform will mix the performances with photos, interviews and archival footage.

“This project is about Howard Zinn, his books and using that body of work to remind and inspire us all that this is a country built on dissidence,” Moore said. “Howard’s work deserves to be on film, and it is time that we paid tribute and captured the struggles of the people.”

Zinn, whose books chronicle the struggles of Native Americans, women, workers and other Americans, said he’d like to continue to inspire activists.

“Our hope is that these words from the past will speak passionately and clearly to the needs of the present,” he said.

Cinetic Media is handling domestic sales for “The People Speak,” which is also being readied for a DVD release after its initial TV run. Artfire Films’ Art Spigel, Ara Katz and Dan Fireman are on board as producers; David Baerwald will provide the music score.

© 2007 Variety.com
Posted by Will at 9:34 AM
Email ThisBlogThis!Share to TwitterShare to FacebookShare to Pinterest

I know of David Baerwald--he wrote the song "Come What May" for Baz Luhrmann's Romeo and Juliet. (The song was not used in the film and was saved for Moulin Rouge instead)

I love 'Come what May'....In fact i LOVE 'Come What May'. Sooo I must be a fan of David Baerwald and thus be a fan of this upcoming series. TiVO to the rescue..unless they are still striking ;)

Anwyay, I was going to throw a wrench in the system (before reading sevenofryhmes's comments) and say...read Mountains beyond Mountains instead!

What a great book! It will be interesting to see how it ends up on screen.