Walking With Others in the Path of Peace

Eucharist in Remembrance of All the Dead in Iraq

Join Bishop Marc and members of the Episcopal Peace Fellowship, and other peaceful people of faith as we commemorate all who have died as a result of U.S. led hostilities in Iraq. A procession will leave Grace Cathedral at 12:30 p.m., and the Eucharist will begin at 1:00. The Holy Communion portion of the service will be held in front of the Federal Building's main entrance as an act of civil disobedience. Watch EpiscopalBayArea.org for more information, or contact Sean McConnell at seanm@diocal.org. There are amply opportunities to participate without risking arrest.

Posted by Will at 12:09 PM No comments:
Email ThisBlogThis!Share to TwitterShare to FacebookShare to Pinterest

Today we are asked to consider our allegiance. Every Sunday Christians in a sense say a collective "Pledge of Allegiance." On this Sunday, Christ the King or Reign of Christ Sunday, our church calendar compels us to look at the strangeness, the vulnerability, in some ways embarrassing contrast between our leader and the leaders of worldly empires. Like a flashing billboard, our Gospel lesson declares Jesus to be no ordinary ruler, king or politician.

A week before we enter Advent, a season in which Christians consider the triumphal coming of Christ at the great end of all and a month before Christmas when we consider Jesus' birth, we are reminded about the strange, disturbing relationship Jesus has to imperial power.

The author of today's gospel lesson shines a light on a rather disturbing place, the trial of Jesus. The trial is presided over by Pilate, a Roman governor. Pilate has come to Jerusalem to maintain order during Passover --- a Jewish celebration of God's subversion of Imperial Power and of God's leading a group of slaves out of bondage in Egypt right under the nose of Pharaoh. Pilate came there to make clear who was boss, to smack down any thing that smelled of rebellion, anything that threatened the power of Rome.

Scholars tell us that Jesus was likely one of many, many others who were brought before the authorities and accused of rebellion. The author of the gospel of John focuses our attention on the tremendous contrast between the supposedly mighty Pontius Pilate with his weapons and armies and the truly mighty Jesus standing alone in shackles. As we read this text, we are in on a secret. We know that Jesus is the Savior, we know that Jesus is the true King, ruler, governor and that Pilate is a fraud. Throughout this scene, I find myself wanting Jesus to breakout of his chains and to put Pilate in his place --- to violently stand up for himself, I want the disciples to come flying in like Batman or Superman, or Terminator, or like a special forces unit of the military --- taking Pilate hostage and making Jesus King. This would be the Kingdom of God by coup d'etat. Perhaps I have been too saturated by violent video games and movies to appreciate the powerful witness of Jesus. Jesus is no typical action hero --- Jesus is our nonviolent savior.

Today's gospel reveals that Jesus is no ordinary ruler, king or politician --- Jesus instead of confronting violence with violence --- Jesus says "'My kingdom is not from this world. If my kingdom were from this world, my followers would be fighting to keep me from being handed over to the Jews. But as it is, my kingdom is not from here.' The Kingdom, the reign, the realm that Jesus proclaims is not dependent on armies, weapons, despots and shackles. Jesus' followers are not taking up arms (although they certainly , thought about it and Peter tried to fight back but Jesus insisted that he stop). No, Jesus has taught his disciples nonviolence, and he stands before Pilate --- with nothing but words --- he comes to testify to the truth.

One stares restlessly at this lesson, we read and wonder what might this passage say to us, how might this text in form us about our own relationship to imperial power or to violence? How are we called upon to testify to the truth? How are we to follow Jesus our King, how are we to proclaim our allegiance to the reign of God, to the kingdom that is not of this world?

A few months ago, I attended an interfaith religious gathering in Washington, DC, a demonstration calling for an end to the war in Iraq. I agonized over whether to risk arrest. Though I chose to stand witness as others were carried away in shackles including a woman in her 70's who I knew had a sick relative at home --- I left that religious gathering against the war more appreciative of the alternative realm, reign that we Christians seek, that we pledge our allegiance to ---

As Father John Dear, a Jesuit priest and peace activist writes,
I pledge allegiance to God's reign of perfect peace, nonviolent love and equal justice for everyone, including the children of Iraq.

I pledge allegiance to Jesus Christ,
And to God's kingdom for which he died—
One Spirit-led people the world over, indivisible,
With love and justice for all.

As the Episcopal Diocese of California stands, with our courageous Bishop and others of faith in a few weeks in front the Federal Building, may we proclaim, even as we may be led away in shackles --- our allegiance to the nonviolent reign of Christ.
Posted by Will at 12:07 PM 1 comment:
Email ThisBlogThis!Share to TwitterShare to FacebookShare to Pinterest 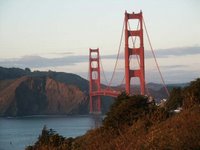 Somehow growing up on the east coast I was taught that folks on the left coast (especially in the Bay area) were all anti-religious secularists. I'm finding that this is far from the truth. Yes, there are many people who have been deeply wounded by some religious institutions and are still nursing those wounds by staying as far from churches as possible (who can blame them) yet there are also folks who are finding hope, healing and transformation in faith communities some for the first time, some after some time away from organized religion. Since moving to San Francisco a month ago, I've met numerous people of faith both inside and outside the church living profoundly beautiful lives of compassionate service, community building, and rooted witnessing for a more just and peaceful world. As this blog continues on the other side of the country from where it was started I'll try to highlight people and places that give me hope for the journey and that seek to in some way embody the way of Jesus in our time.

In just a minute I'm leaving for Eucharist at San Damiano Friary - a tiny community offering a whole lot of love to this city in numerous ways such as the S.F. Night Ministry. This morning, I shared a meal with a whole bunch of religious folks (Jewish, Christian, Muslim, Hindu, Buddhist and many others) at the annual Interfaith Prayer Breakfast. St. Francis of Assisi I'm sure was pleased to see the religious people of his city coming together to celebrate organizations that are seeking to offer at-risk youth and children alternatives to violence.

Shalom!
Posted by Will at 8:31 PM No comments:
Email ThisBlogThis!Share to TwitterShare to FacebookShare to Pinterest

My new friend The Reverend John Kirkley, President of Oasis, the lesbian, gay, bisexual, and transgender ministry of the Episcopal Diocese of California has written a thoughtful sermon in which he comments on the recent sex and drugs scandal involving prominent evangelical mega-church pastor, Ted Haggard.

One of the things that bothers me the most about this scandal are the silent victims. Those numerous people, who have been influenced by the evangelical movements anti-gay culture, some who may have attempted the tragic and deeply problematic therapies to alter their sexual orientation, such as those advocated by Exodus International. Hopefully good may come out of this tragedy --- as people like Tony Campolo and Brian McLaren have suggested.
Posted by Will at 5:10 PM No comments:
Email ThisBlogThis!Share to TwitterShare to FacebookShare to Pinterest

I am so thrilled about the Episcopal Church's new leader, the Right Reverend Katharine Jefferts Schori. Check out the www.episcopalchurch.org for more on this profound spiritual leader, the media is also covering this story in a variety of ways. If you have a minute check out Desmond Tutu's response to Bishop Schori's election at the Trinity Wall Street website.
Posted by Will at 2:12 PM No comments:
Email ThisBlogThis!Share to TwitterShare to FacebookShare to Pinterest
Newer Posts Older Posts Home
Subscribe to: Posts (Atom)